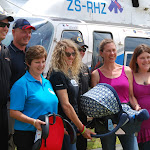 Clare Vale was recently nominated for the Colin Watling Award at this year’s Bridgestone SA/ SAGMJ “Motor Sportsman of the Year”.

Clare on the nomination. “It’s a great honour to be nominated for the Colin Watling Award – one only has to look at the calibre of previous winners and nominees to understand just how prestigious it is. There are so many people who work tirelessly (often thanklessly!) for the benefit of motorsport, so for me it’s very humbling to receive a second nomination. I’m passionate about motorsport and feel it’s a privilege to participate – I think we all have a responsibility to help build our sport, and this nomination motivates me to do even more. A big thank you to Bridgestone SA and the SA Guild of Motoring Journalists for their continuous support of this great initiative!” 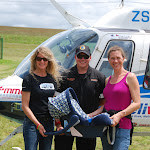 There are five nominations for the 2012 Bridgestone SA / SA Guild of Motoring Journalists “Motor Sportsman of the Year” award, which will be announced at a special function in Johannesburg on February 26.  There are two nominees for the Colin Watling Award, which recognises significant contribution and achievement by a non-competitor in motor sport.

This is the 20th year that Bridgestone SA has sponsored the most prestigious award in local motor sport, which dates back to 1964 and recognises and rewards outstanding and remarkable achievements by South African motor sport competitors.

The nominees, in alphabetical order, are:

Motor Sportsman of the Year:

Darryl Curtis, 42, a multiple former off road and enduro motorcycle champion, finished a remarkable 22nd out of less than 100 finishers in the 2012 Dakar Rally in South America at his first attempt.  Riding a privately-entered South African-backed Broadlink KTM in the 8 500-kilometre race through Argentina, Chile and Peru, he started 144th out of 185 entries and was the highest-placed of four South African riders.

Giniel de Villiers, 40, finished third overall and first in the class for petrol-engined 4×4 vehicles in the 2012 Dakar Rally.  Driving a South African-built Toyota Hilux in the all-South African Imperial Toyota team’s first attempt at the world’s longest and toughest motor race, the former “SA touring car and off road champion and 2009 Dakar Rally winner scored his fourth Dakar podium in five races and has now completed each of the 10 Dakars he has competed in.

Kelvin van der Linde, 16, won the Engen Volkswagen Cup in his first year of senior circuit racing to become the youngest ever VW Cup and senior circuit racing national champion.  Driving a Ferodo VW Polo, he dominated the championship with more wins (seven), more podiums (14) and more qualifying bonus points than any other driver.  The winning margin over the runner-up was a massive 62 points.

Duncan Vos, 52, and Rob Howie, 40, won the Absa South African Off Road Championship in a Castrol Toyota Hilux and were also 10th overall in the Dakar Rally in the Imperial Toyota team’s second Hilux at their first attempt.  It was Vos’s fifth national off road championship title and Howie’s first in a season that saw them win three races and finish on the podium five times.

Wade Young, 16, beat 400 top international and South African motorcycle riders to become the youngest-ever winner of the Roof of Africa Rally in Lesotho, an event that has the reputation of being one of the toughest of its kind in the world.  He also won a silver medal for South Africa in the FIM International Six Day Enduro and was third in the SA motorcycle enduro championship.

Glyn Hall is the inspirational leader of the Toyota Motorsport team who won the South African off road drivers’, co-drivers’ and manufacturers’ championships, finished second in the national rally championship and placed third and 10th in the international Dakar Rally in Toyota Hilux 4x4s built by the team in their Johannesburg workshops.  Hall’s company, Hallspeed, which is contracted to run Toyota Motorsport, is an internationally renowned designer and builder of rally and off road racing vehicles.  A third Toyota Hilux 4×4 built by Hallspeed, entered by a Belgian team and driven by an Argentine, finished fifth in the Dakar to give the SA-built bakkies a remarkable 1-2-3 in their class. 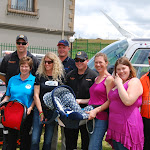 Clare Vale is a racing driver who is chairperson of the Women in Road Safety Forum, which organised a highly successful road safety campaign over the December holiday period.  She has worked tirelessly to encourage women to race and to achieve the best results they can.  In 2011 she started the Women in Road Safety forum, a gathering of influential and powerful women in motoring dedicated to highlighting the need for more to be done in promoting road safety.  She is a successful fundraiser for worthy causes and uses motor sport as a vehicle to achieve this.  She has become an effective ambassador for motor sport and is much more than a racing driver.