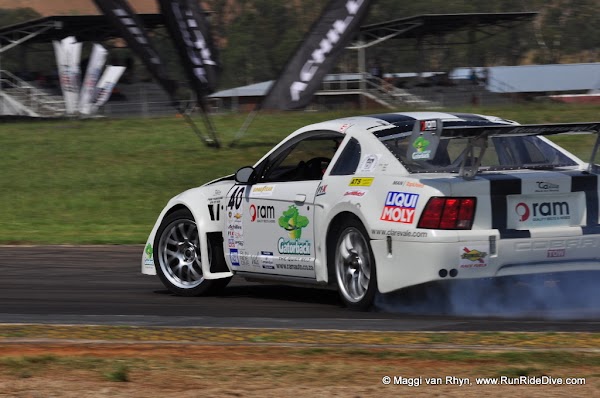 2011 was a bit of an up and down year for the Gatorback RAM Team. Our drift car build took a lot longer than we expected, so the Mustang wasn’t ready to compete until the very last event. We had taken a sabbatical from WesBank V8s in anticipation of spending more time drifting, so we only competed in the last two races of the season and did not do much development of that car. We did well with the Porsche 917, however, finishing 2nd in the International Sports Prototype class despite not racing in all the events!

What are your expectations for 2012?

2012 is going to be a much busier year! We have already been competing in the National Supadrift series and plan to do all the events in the calendar. We’re also going to be racing the Mustang in the V8 Supercar class on the WesBank Super Series where dates allow, and will be racing our 917 in ISP again. Our focus will be on doing well in Supadrift, as we believe that this class is going to be high profile and a good place for the team to compete. We are going all out to find a top quality tyre sponsor for the drift Mustang and will be doing a lot of promotional events with this car.

What has been your biggest challenge going into 2012?

It’s a challenge getting to grips with the technicalities of drifting, both from a driver and a team perspective. We all come from a circuit racing background so we’re breaking new ground on every level.

Who do you think was the best local racing driver in 2011?

On the drift circuit, Wade van Zummeren has impressed us with his skill and humble attitude. There have also been some very talented young drivers coming through in circuit racing, both in cars and on bikes.

Where is your next event? And where can people find out information on you or the racing series you participate in?

Our next V8 Supercar event will be in Port Elizabeth on April 28th.

This is always a big event for us, as the Gatorback RAM factory is based there and we go all out to meet the staff and put on a great show for them. We’ll also be drifting at Phakisa at the end of March and competing in some drift events at The Rock over the next few months. Please stay up to date on all our news at our revamped

Your pick to win this year’s WRC and F1 titles?

I’m a big Renault fan, so I’m hoping that the new Lotus team will do well. I also fancy Schumi’s chances of upsetting some of the younger drivers’ ambitions, but Sebastian Vettel is probably the one to beat again. In WRC I think one of the two Sebastians will come out on top at the end of the day.