Cape Town – This weekend saw the national SupaDrift drifting series travel to Cape Town for the first time. Making the event even more unique was that it was held at the Grand West Casino, another first for the series. The arena track made for intense, close drifting in a confined area. Adding to the challenge, a heat wave in Cape Town saw daily temperatures reach almost 40 degrees, leading to some overheating cars and drivers! With a field of over 30 competitors, Clare qualified well in 14th place, well ahead of some big names and experienced drivers. Her first Top 16 tandem run was against Shane Gutzeit in his mighty Dezzi Nissan. Clare held her own in her following run, and Gutzeit demolished a row of barriers while chasing the RAM Mustang in Clare’s leading run. His mistake made Clare the first lady drifter to qualify for the Top 8 in the national drifting series!

She then came up against local star, Shane Green. After a terrific lead run from Clare, Green outwitted Clare into making a mistake in her initiation and moved ahead into the Top 4. All in all, it was an excellent weekend for Clare and her great result will add to her points haul in the 2014 Championship.

Clare Vale on the event: ”I was really looking forward to the Cape Town event, especially as an ex Capetonian. I was a little worried when I saw the layout of the track, as the big RAM Muzzie likes the fast circuits and this one was very tight. The short run up to the initiation box also concerned me as I was running quite a long diff ratio. However, I was able to use Friday’s practice to find some lines that worked for me and Saturday turned out brilliantly. 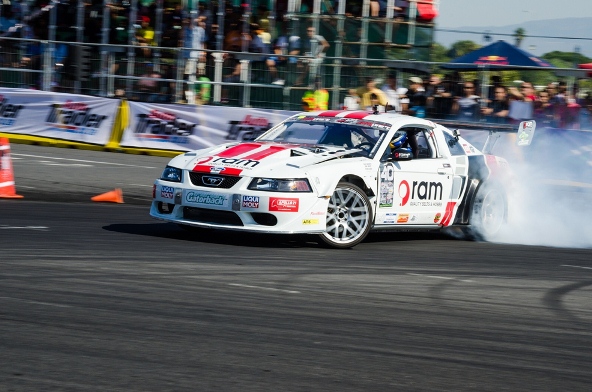 I was very happy to qualify 14th as the standard of drifting was sky high, and when Shane Gutzeit made a mistake behind me we moved into the Top 8! I was confident we had the edge on Shane Green in our lead run, but I misjudged my speed with his slower entry when following him and ran off track, handing him the win. The RAM team gave me an awesome car for the weekend and we had great support from the crowd, so all in all I’m extremely happy with our Cape Town event and can only improve on our result!”