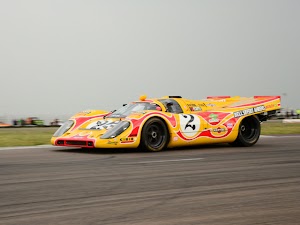 Pretoria – The weekend saw a large and enthusiastic crowd at the Zwartkops International – with over 350 cars entered people knew it was going to be an exciting, action filled race day!

Clare Vale put her Gatorback RAM Porsche 917 in 5th place on the grid for the International Sports Prototype race. An unlucky start to the first race saw Clare fall back, but a very determined drive brought her back through the field to regain 5th position at the flag.

The battle carried on into the second race, where Clare again brought the Gatorback RAM 917 home 5th after an interesting race on a track that was neither wet nor dry. The race was eventually red flagged after a car spun out. The Porsche races on big slick tyres, but fortunately the heavens only truly opened after the end of the heat so there was just enough grip to finish the race. Coming 4th overall on the day was a wonderful return after an interesting days racing.

Clare Vale on the race weekend, ”The annual Zwartkops International is always a very special and unique event, and it’s a privilege to race against some of the incredible cars that come from overseas to compete. We spent a lot of time changing engine maps and took a chance by running an old map on Saturday for the races. Although the car wasn’t running at full power, it has superb handling and this helped me to put on an exciting show for the fans in Race One. We made sure we had full boost for Race Two, but the combination of rain and very old tyres meant that I had to do some careful tip toeing through the corners! The Gatorback RAM team really enjoyed the support of the crowd and we’re looking forward to a full racing season with this beautiful car.”