Zwartkops Kart Track played host to this year’s Charity Cheetah Karting Day in aid of the Ann van Dyk Cheetah Centre. Clare Vale’s racing team partnered with the Centre 6 years ago, and this was the 6th annual karting event in aid of the Centre. Each year, the event has grown in numbers and popularity, and this year was no exception.

Enthusiastic teams from TATA SA, Jaguar Land Rover, Liqui-Moly, RAM, Veyance Technologies, Honda SA, Bridgestone SA, Bridgestone Retail, Pets en Transit, Locost and a Max Challenge Promotions sponsored Cheetah Centre team joined the action on the day. The racing was close from the start but despite the mix of experienced and novice drivers, all the teams gave each other room and had plenty of fun! 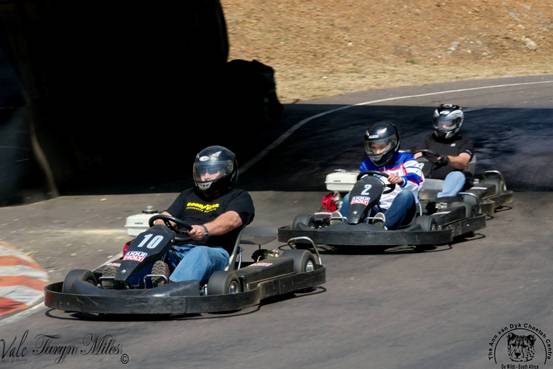 At the flag, the top 3 teams finished on the same lap after 2 hours of great racing. Honda SA eventually pipped the TATA SA team of Xavier Gobille and 2012 Champs, Locost, for the win. The Honda SA team carried home the magnificent bronze cheetah floating trophy, as well as a signed Toyota Free State Cheetah Rugby Team jersey, custom made RAM Cheetah tog bags and a Liqui-Moly hamper. Xavier Gobille, Executive Director of TATA Africa, achieved the fastest lap and also received a signed Toyota Free State Cheetah Rugby team jersey. The team spirit award of SAF-FA energy drink hampers went to the irrepressible Pets en Transit team, who had a great team of supporters cheering on their drivers. Driver of the Day went to Mehdi Mokrane, racing for the Bridgestone Retail team and Most Spectacular Driver was awarded to Dustin from the Cheetah Centre team, who disembowelled his team’s kart on a kerb. They both received skin care hampers from Kiehl’s SA.

After the prize giving, presented by the evergreen Voice of Motorsport, Roger McCleery, Byron the ambassador Cheetah arrived to meet the competitors and their families and thank them in person. Although Byron was at times more keen on chasing the motorcycles on the main circuit than greeting the people lined up to meet him, his presence was a great reminder of the real purpose of the day – this year’s event raised the highest amount to date, and a very welcome donation of R33,336.61 was handed over to the Centre .

Clare Vale on the event: “It’s a privilege to be able to assist the Ann van Dyk Cheetah Centre, as they receive very little funding and rely on donations to make ends meet. They do amazing work, not only with cheetahs but also with African wild dogs, vultures and many other endangered species. The annual karting event is a great way to use motorsport in a fun and innovative way to raise funds for a good cause!”